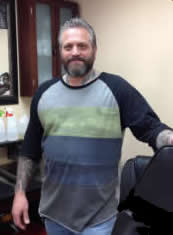 John is a versatile artist whose long career has allowed him to master both the artistry and the technical skills of the craft.  His fascination with Tattoos and artistry began when he was young, waiting each year for Halloween when his dad would draw tattoos on his arms to match his outfits.  As he grew older, he went into the family’s carpentry business, but the lasting impression of his youth stayed with him.  John got his first tattoo in 1985 and developed a friendship with his artist.  In 1992, that friendship and his early interest in tattoo art grew into an apprenticeship, where John continued carpentry during the day and apprenticed in the evening as a tattoo artist.  During his apprenticeship he not only perfected his artistry and honed his technical skills, he also learned from his mentor how to run a successful tattoo shop.

In 1996, at the urging and support of his entire family, he opened his own shop -Vanity Tattoo.  Vanity Tattoo was founded on the principles of strong work ethic, professionalism and commitment to family.  His wife April, who has been his strongest supporter since opening Vanity Tattoo, is at the shop smiling every day to greet the customers.  She shares in his strong work ethic and together they ensure everyone who walks through the door leave a customer for life.  In keeping with John's family commitment, Vanity Tattoo is a true family business.  John's sons Johnny and Frankie are also part of the family business.  Johnny has chosen to follow his father's footsteps as a tattoo artist at Vanity, while Frankie on occassion spends his time making sure the shop is up to the John's strict sterilization standards.

Vanity Tattoo eventually outgrew the space it was in.  Returning to his carpentry roots, he and his father teamed up to design, build and furnish a new facility located in Carpentersville, IL on Route 31.  They moved the shop to this location in 2012, where John takes pride in the craftsmanship of the building, the cleanliness of the shop and the down-to-earth environment where customers come to enjoy the comfortable and inviting atmosphere.  John has been blessed to have taught many talented artists, and to this day maintains close relationships with artists whom he learned from and taught.  Along with his family and some of the most talented artists in the industry he works every day to serve customers throughout the Chicago land area and beyond.