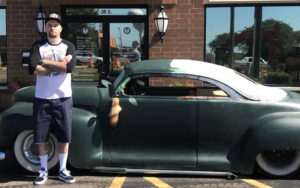 Like the other artists at Vanity Tattoo, Steve’s interest in tattooing began very early in life.  He remembers wanting tattoos as early as 3 or 4 years old, going to tattoo shops with his dad and picking flash off the wall, unaware of how long he would have to wait to actually get one. Another early memory of his involves his uncles building a prison style tattoo machine and offering to give him a cool snake tattoo, but mom didn’t like that idea too much! Steve has been drawing for as long as he can remember and took a serious interest in tattooing as a teenager, often buying any tattoo magazine he could find and using them as references to draw and color his own tattoo flash. In 2007 his lifelong interest of tattooing went from being just a hobby to a career.

Eager to learn, Steve spent 7 days a week at the tattoo shop during his apprenticeship while working another job full-time in the mornings. He finished the apprenticeship in just 9 months and spent his first 2 years tattooing in Chicago. From there, he went on to work at a couple very well known shops in Elgin and Carpentersville before landing here at Vanity.

While most artists specialize in one style of tattooing, Steve is extremely versatile and can tattoo almost anything you throw at him, from traditional to realism - and everything in between! He is also a skilled tattoo machine builder, and uses machines he has made for every tattoo.

Outside of tattooing Steve’s main interest is in classic cars and is a proud member of the Bare Bones Car Club. He especially likes 1950s and 60s period-correct hot rods and customs, and spends much of his spare time in the garage building cars.